The newest Worms title from Team17 brings Worms back to the 2D landscape, with some very nice 3D accents. Now on a new engine, the game introduces some new physics elements such as small bodies of water that can be manipulated by destroying the surrounding environment, explosive zippo lighters, and also water-bottles filled with water ready to drown your opponent.

Also new to the series is the addition of different classes. You now have the option to choose between the Scout, a lightweight, fast moving worm; the Soldier, your standard speed, standard damage worm; the Scientist, a worm that can place better equipment such as turrets; the Heavy, obviously the heavier of the four and packs a harder punch, but can take more damage than the other three worms. 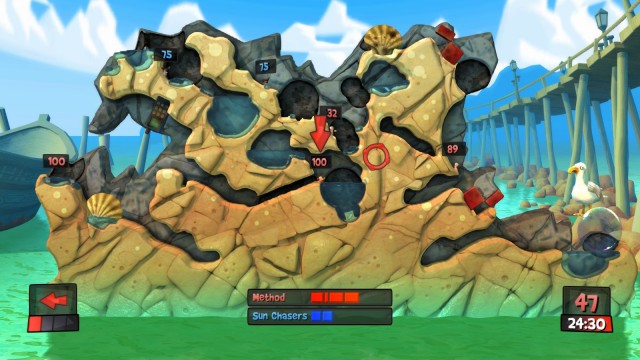 Any given battlefield can have its strength and its weaknesses. In some cases you may find an explosive lighter that can set off a chain reaction that might decimate two or three of the opposing worms. On the flip side, you might accidentally blow a hole above you filled with water that causes a worm or two on your side to sink into the ocean below.

If you’ve never played a Worms game before, don’t worry. There are eight battles you go through to help understand how to play the game, what techniques you can use depending on what kind of weapons you have, and where you are in relation to an opposing worm.

There’s also a lot of customization options in the game. You can choose which class of worms you want to deploy, whether it be all Heavies or all Soldiers, or maybe just a mixture of the four. You can also choose between different voice packs to modify the sound your worms make, and even choose what the gravestone looks like after one of your worms perishes. Worms: Revolution can be quite a fun game, but it can also be rather challenging at times, and even frustrating. There were a few issues with the parachute system that I found. When my worm would fall from a certain height, most often the parachute will automatically deploy just as it is supposed to. However, occasionally it would not deploy. It made going through certain battles rather challenging and got very old very fast. Especially when all of my worms were dead 90% through the battle, I had to start all over.

If you’ve enjoyed the Worms series in the past, definitely pick this up. If you enjoy casual style games that still require strategy to master, again, pick this title up. Even with the very small issues I encountered, its still a very fun title and well worth the $15.

This review was based on the version available on Steam for PC. A copy of this game was provided by a representative of Team17 for the purpose of this review.