Everyone loves a good alien tale, right? In Alien Patrol, which is considered a “fast-paced comedy shooting game”, you’re an old southern guy who doesn’t reckon aliens should be invading earth so he takes it upon himself to do the dirty work. 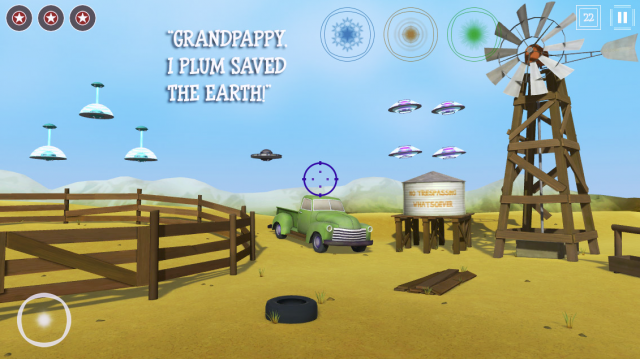 The game just launched on December 5th so there isn’t a whole lot of information from reviews or download counts that can help us in identifying its potential success on OUYA. That being said, the screenshots and graphics are pretty gorgeous, and at only $.99, it looks like a good value. I still can’t believe people complain about paid games: just look at the quality of ONE screenshot and estimate how long it took to create. That’s one picture – a small fraction of an entire game – for less than the cost of a 20 oz. soda.

At this point, my biggest suggestion for Alien Patrol would be to update their teaser:

I can totally understand/appreciate the comedy approach, but right now, I think the trailer does the game a disservice. The southern man’s singing is a bit drawn out, leaving the viewer waiting for something big to happen. Something does happen… but not something big enough. Rather than being left with an eagerness to download and play, you’re left with a thankfulness the guy has stopped singing. This could be fixed by cutting the current trailer in half and attaching gameplay footage to the end.

Give the game a download on the iTunes App Store and let us know what you think about the game itself.