Feline Arts might be best known for their heavily downloaded “Talking Character” apps on Android (via PhoneLiving LLC), but their latest game – Phoenix Run – proves the company can develop much more interactive and exciting titles. Now they’re aiming to take that success to the OUYA with a game called Dragon Maze.

Although the graphics don’t seem quite as sharp as Phoenix Run, but critics should note the “pre alpha” video title. For an extremely early gameplay video, Dragon Maze is looking pretty good. The character and nature reminds me a bit of Diddy Kong’s Quest on N64, which is a game series I thoroughly enjoyed.

The game will be single-player, but the company has already received requests to make the game into a multi-player co-operative game, something that would drive further parallels to Diddy Kong and a major reason for that game’s success. Even as a single player game, though, Dragon Maze looks promising.

Details are few and far between, but here is the minimal info/overview shared on the company’s site:

TARGET PLATFORMS ARE OUYA AND STEAM. IN DRAGON MAZE YOU PLAY AS A DRAGON WHO GOT HIS TREASURE STOLEN BY THE EVIL CLAW GANG, YOUR GOAL IS TO RECOVER ALL THAT WAS STOLEN FROM YOU THROUGH SEVERAL MAZES AND WORLDS, EACH WORLD WITH HIS UNIQUE SETTING AND MECHANICS. UNLOCK SECRET LEVELS AND POWERS AND DEFEAT THE CLAW GANG.

We’ll keep you updated as details emerge. In the meantime, head on over to OUYAboards.com to continue the conversation! 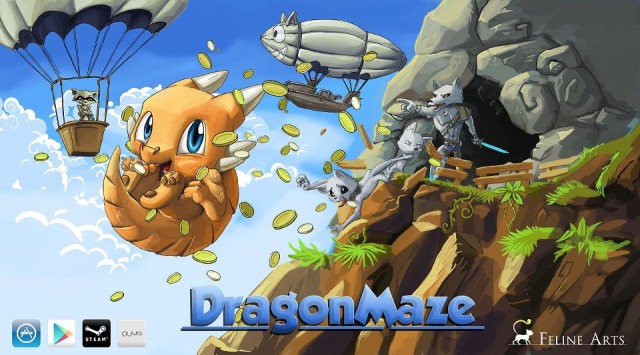