Nintendo Switch Specs (what we know so far)

Nintendo has announced the Nintendo Switch, a hybrid gaming console that you can use as a handheld or play on your big screen TV. Although Nintendo hasn’t released an official list of Nintendo Switch Specs, we’ve done some digging to compile a likely list of launch specs.

The following specs are subject to change and have been compiled by the GameFans team after conducting a large amount of research. We will keep this page updated with the latest information. 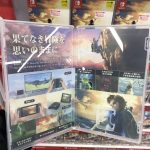 5 games we want to play on Nintendo Switch