This generation of gaming has focused on a battle between frame rate and resolution. In one corner, you have a group of people who firmly believe that the prettier a game is, the better and so they side with greater resolutions. They want to be fully engrossed in the worlds that developers are crafting. If a higher frame rate means sacrificing resolution, they’re not too happy.

And in the other corner, there sits the group who believes the complete opposite. They want 60 FPS, even if it results in a resolution drop from 1080p down to 900p or 720p. This camp believes that instead of shooting for a higher resolution, the logical thing would be to first focus on obtaining and maintaining a frame rate of 60 FPS for a smoother experience. Ideally, this means a more realistic game in a way that a higher resolution cannot provide, in addition to smoother, more consistent gameplay, thus leading to a better experience.

With PS4 Pro, that fight is quickly becoming a thing of the past. As the countdown to the console’s launch next week begins, we’re seeing an increasing number of developers push both options for the Pro. They’ve realized that they no longer have to satisfy one group or the other. They can target both of them.

Rise of the Tomb Raider was the first game we heard of with such choices. For this game, you’re given three options: 4K/30fps, 1080p/60fps, and an “Enriched Visuals” mode that settles for a frame rate of 30fps in exchange a better image quality. The video above lets you see some of these options in action. 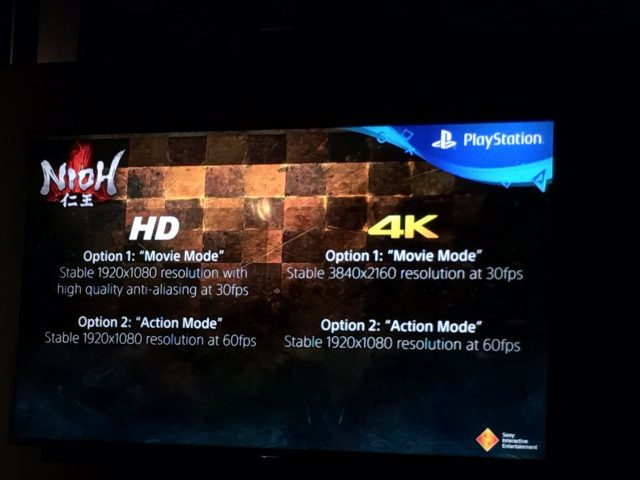 Another, upcoming game that allows you to choose your experience is Team Ninja’s Nioh. As detailed earlier today, Nioh players who opt to game on a 1080p display will be able to prioritize a smooth, 60fps experience over visuals, or shoot for 30fps with improved visuals. If you’re gaming on a 4K set, you’ll have the option to set it to 4K/30fps, or 1080p/60fps. Although the picture isn’t 100% clear about the final option, we assume this means they’ll use a checkerboard rendering technique, like other developers, to upscale the 1080p game to 4K while maintaining 60fps.

Jonathan Blow’s The Witness will also let you tinker with graphical settings. On a 4K display, you can choose between a 1440p resolution rendered at 4K with 60 FPS or 4K with 30 FPS. Meanwhile, on a 1080p display, you’ll enjoy a 1080p resolution (higher than the game’s previous 900p on the standard PS4) at 60 FPS.

If you’re worried about choosing the 60 FPS option on 1080p displays, you shouldn’t be. Multiple developers have already stated that they will be utilizing supersampling to provide a good image quality. Essentially, supersampling takes the 4K-rendered image and displays it at 1080p, resulting in a crisp image that you wouldn’t get from a standard PS4. For more on supersampling, you can visit this very helpful NeoGAF thread.

Going forward, hopefully, all developers provide graphic options on PS4 Pro (and eventually Microsoft’s upcoming Scorpio console). until then, will you be picking up a PS4 Pro next week?